On occasion of month of the Czecho-Slovak culture reciprocity, BIBIANA and BAB presented a collection of animated movies called “Slovak animation - In memoriam evening dedicated to Katarína Minichová”.This event was held with the cooperation with National Film Archive Prague (NFA), Film and TV faculty of VŠMU Bratislava (FTF VŠMU) and Radio and Television of Slovakia (RTVS).

The collection consisted of bedtime stories made by scriptwriter and dramaturge Katarína Minichová as well as movies made by students of FTF VŠMU made under her supervision.

She graduated from School of Arts and Sciences at Charles´University Prague with MA in Film and Aesthetics.

Initially, she worked as a film critic and theorist specializing in children and youth programs.  Her work in television (Slovak Television, STV) ranged from researching children as audience to analyzing feature, documentary and animation programs. She later worked as a producer, executive producer and screenwriter of feature and animated programs, many of which received awards at home and abroad. She authored numerous analytical studies and screenplays for television features. She was a member of international juries and conducted interanational workshops and conferences in the area of film and television creativity for  children. For over a decade until 2002 she was appointed a member of the Experts Youth Group of the European Broadcasting Union (EBU). Since 1993, she has lectured in screenwriting  and dramaturgy at the Departement of Animation, Academy of Performing Arts in Bratislava (VŠMU). She was elected Vice President of CIFEJ (Centre international du film pour l´enfance et la jeunesse) in 2009 and has served on its board since 2012. 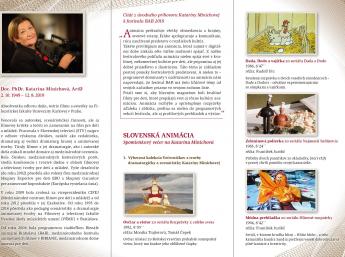